The Day-to-Day Life of a Social Media Consultant

Back to All Stories

What do the Pope, rainbow bagels, and Shih-Tzu puppies have in common? Well you can find out during this week’s Marketing Cloudcast episode! On this week’s episode we met with Meg Connolly, who has done just about everything when it comes to social media marketing. She has managed wildly successful social media campaigns that landed her free advertising spots on network television during the Super Bowl, represents some of the most successful influencers in the business, and has even become an influencer herself.

For the full conversation that's filled with many more insights, subscribe on Apple Podcasts, Google Play Music, Stitcher, or wherever you listen to podcasts.

Here are some highlights from our conversation with Meg Connolly.

1. The Role of Social Media Influencers

“Now in the marketing space, influencer is a very overused word and no one really can put a concrete definition on it, but the way that I would define it, is someone that truly has an engaged audience on social media,” says Meg. Ultimately, it’s about finding the right fit that makes sense for both the brand and the influencer: “For example, my dog, who right now we're around 40,000 followers on Instagram, it's funny. I can't make it up, but our followers are dog owners for the most part, and usually millennial men and women. When we're promoting a product that is an animal product or a pet product, people will listen to what we have to promote because they're interested in what she has to say,” she says, “but a brand such as a car company wouldn't necessarily fit my dogs brand voice, so that wouldn't work.”

2. The Day-to-Day of a Social Media Consultant

So, what does a day in the life of an active social media consultant look like? “My day to day definitely is not a cubicle desk job type situation. I'm traveling a lot during the day. I'm on a plane at least four times a month, and I'm going to meet with different influencers and different brands and going to networking events to see if I can fit my influencers with different brands.” It’s a lot of networking, and Meg’s unique business cards certainly caught my eye at Dreamforce, which led to this interview. Spoiler alert: her business cards look like a magic trick deck and they were beautiful.

Other than that, Meg spends a lot of time crafting the perfect social media calendar for each of her clients. A key part of this is taking the time to look at the data that comes in from social media advertising, “the analysis for that is crucial for me to able to better my copy for my posts for my clients.”

3. The Importance of Networking

While people often think of social media as a new industry with new rules, a lot of being successful comes down to the old school rules: “honestly this business is all about relationships and it's about who you know. I know that is taboo to say that, but it is really the truth.” You never know when you’re going to meet someone who will become important later, so make sure to get out to every event that you can go to and establish some relationships that could pay off later down the road.

4. Getting Started in Social Media

“My dad always told me, he said find what you love to do, and just learn to make a living from it, because then you'll never work a day in your life,” Meg says. When she started thinking about how that really applied to her own life, she realized that she had gotten a lot of satisfaction out of being the social media chair for her sorority in college. When she left her PR job in Manhattan, she started freelancing for doctor’s and real estate offices, where she ended up making the connections that led her to coordinating the social media strategy for the Papal Visit in 2015. You really do never know who you’re going to meet.

5. The Papal Visit to the US

It was two weeks before Pope Francis was headed to New York City and they were in dire need a social strategy. Meg Connolly stepped in to oversee the social media strategy that would influence not just NYC, but the entire world. She worked with St. Patrick’s Cathedral and the Vatican. She says, “What I did was, I looked at the analysis and the demographics of each platform; Facebook, Twitter, and Instagram.” The goal was to use Instagram and Twitter as a tool to evangelize more broadly and then use Facebook as a way to cater to the older demographic.

Rainbow Bagels is probably one of Meg’s biggest success stories. It started small, when they sent bagels to food blogger and Instagramer Jonathan Cheban, aka foodgod. From there, her team targeted a few meme influencers and even Adriana Lima to start getting the word out, which got the attention of Insider Food. “Insider Food put out this video at the bagel store, which hit 72 million views, and it was picked up by Buzzfeed, PopSugar, many different publications online within the next 24 hours. Then every single news source imaginable wanted these bagels.”

All of the sudden the Rainbow Bagel was so popular that the shipping orders were backed up online for six months, the line at The Bagel Store was three hours long the entire day, and they were contacted to make custom bagels for the Super Bowl. They landed airtime on CBS Sports, which is huge when you think about a typical Super Bowl ad costing around $5 million. The Bagel Store landed this all for free. As Meg says, “I felt like I peaked at 25 years old, but it was amazing.” 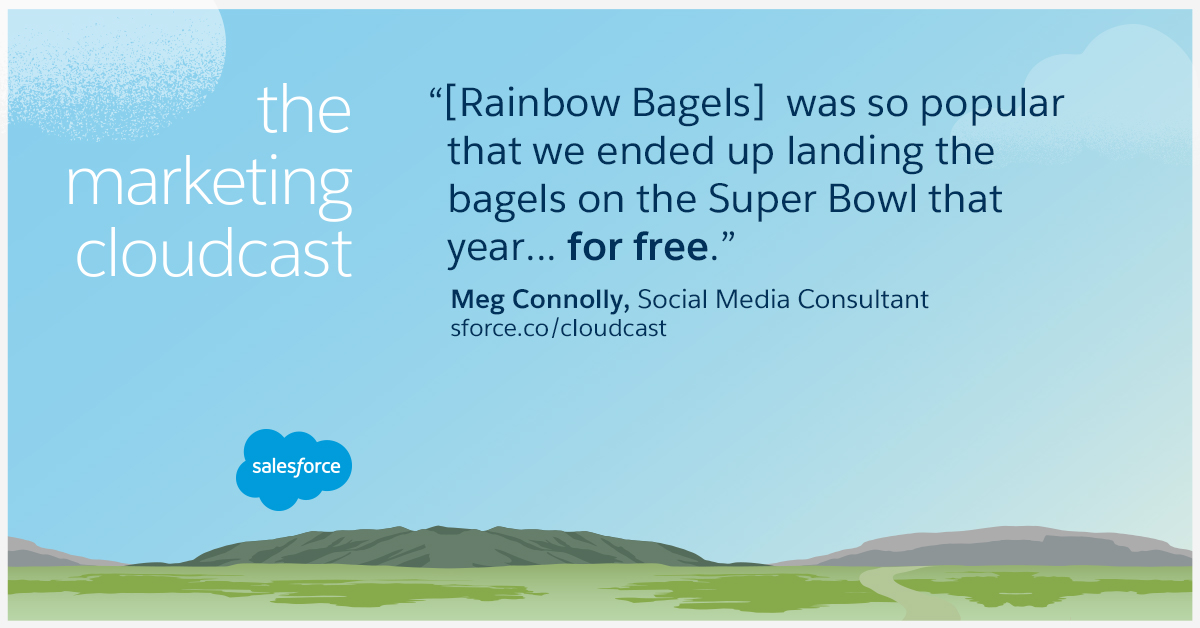 7. The Key to Influencer Marketing

For Meg, successful social media influencer marketing comes down to three things: “you need to make sure that you know what you're doing, you know who your audience is, and you know who to market to.”

If you’re aspiring to be an influencer yourself, you need to “make sure that there is a method to your madness.” In other words, you need to have a clear and concise strategy and message that you want to send to your audience, because there's no reason to follow you if there's no strategy. When it comes to dealing with negative comments, the best practice is to ignore them: “there's no need to give them negative attention, because then it seems as if their opinion matters.”

8. What It Means to Be a Trailblazer

For Meg, being a Trailblazer means persistence and innovation. “Even if it takes forever, or what may seem like forever, being a Trailblazer is being someone who never gives up and is constantly thinking outside the box.” If you have a clear goal, and a strategy to hit that goal, then keep working and keep thinking and you’ll find a way to make it happen in the long run.

Meg offers much more insight on social media and influencers in the full episode of the Marketing Cloudcast. Join the thousands of Trailblazers who are Cloudcast subscribers on Apple Podcasts, Google Play Music, Stitcher, or Overcast.